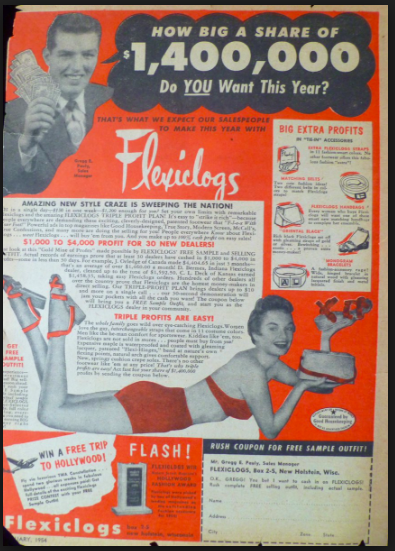 Every now and then I’ll be writing a love letter to some of my most swooned after novelty fashion items from years gone by. Leave your good taste at the front door.

Do you love fashion?

Do you aspire to be your own boss?

Do you want to  make a fast buck?

Do you have a passion for wooden clogs…

Look no further than the novelty footwear trend that swept America – Flexiclogs!

Flexiclogs – articulated wooden soled sandals – came in a dazzling array of nine colours. The interchangeable colourful straps offered versatility and more bang for your buck when it came to outfit co-ordination. And don’t worry – there was matching handbags & belts too!

Articulated wooden soles were a product of resourceful product design during World War II. The War Production Board issued the L-85 restrictions during April 1942 – these limited both the consumption and design of clothing into the early 1950s. Materials such as leather and rubber which were used widely in military uniforms were restricted in civilian footwear and as such synthetic materials such as neoprene were championed in new innovative designs. 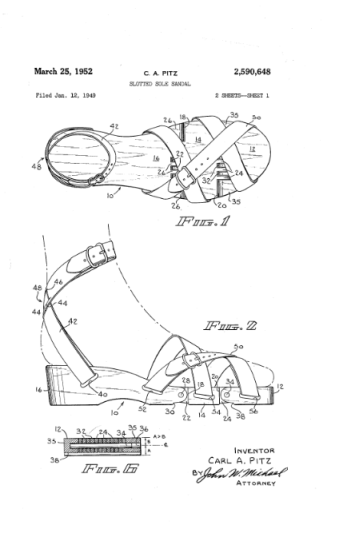 The patent for the ‘Flexi-Hinge’ wooden sole was finalised in 1952 and thus Flexiclogs were born. Promising to ‘flex with your foot’ the ‘Flexi-Hinge’ wooden soles were made of waterproof maple wood with a DuPont Neoprene skid proof crepe sole promising to hug the curves of your foot! I wonder just how loud these hinged soles were clopping down the pavement back in the day? And what happened if you got your pinky toe caught in one of those hinges mid stroll?

Although they were readily available for all the family, I’ve yet to see a pair of men’s Flexiclogs. The image of  a dapperly dressed travelling salesman in his starched business suit wearing a natty pair of rainbow hued Flexiclogs delights me to no end.

Heralded as a ‘new style craze that swept the nation’, over 1 million pairs of Flexiclogs (so they say) were sold by men and women up and down America. Advertisements promised up to $10 profit per sale with an attractive free sample kit and handy demo tips to seal the deal. The shoes were sold door to door or during Flexiclog parties – a lot more exciting than tupperware parties in my opinion!

Flexiclogs are one of my personal vintage Holy Grail purchases – the likelihood of me snapping up a wearable pair of size 8’s in Scotland are slim to none but a girl can dream right? I’m a sucker for vintage fads and the inter-changable straps are a big sell for me although let’s be real – I would probably only ever wear kelly green ones…

Imagine my delight a few weeks ago when I stumbled about Star Struck Clothing’s very own revamped version of Flexiclogs available for the modern women today. These beauties appear to be incredibly true to the original mid-century designs –  alternating straps included. I know what’s on the top of my list to Santa this year!

Do you own a pair of Flexiclogs? How do they sound? How do they feel? Get in touch with me – I’d love to hear your thoughts.

One thought on “Novelty Corner: Flexiclogs”