The Sixties welcomed a sexual revolution with fashion playing a key role. Italian fashion designer Emilio Pucci liberated women from the restrictive clothing of the previous decades with the patent of a revolutionary fabric which was both breathable and wrinkle free. The designer was an avid traveller and knew the importance of wearability in a women’s wardrobe and the innovative fabric became key to his design practice. Pucci’s designs were often simple silhouettes such as shifts, capris and high collared blouses in a variance of loud patterns and colours. The garments were easy to wear and instantly recognisable to the brand with thanks to the iconic, psychedelic prints. From the mid 1950s onwards Pucci was fast becoming a symbol of the fashion forward woman. It was no surprise that some of the eras most famous females such as Marilyn Monroe, Sophia Loren and Jacqueline Kennedy were stepping out in his creations.

The designs were modern, chic and effortless with the bold prints echoing youth culture of the time. Garments had the allure of couture but did not come with the hefty price tag with Life magazine quoting in 1964, ‘creations can range from a $2.50 hankie to a $2500 evening dress.’ This variance of accessibility allowed women from middle to upper class backgrounds to wear Pucci.

Prior to the turn of the decade, Marilyn Monroe was famously known for her hourglass silhouette which was amplified by skintight clothing. Her curves were so ample that she urged seamstresses to sew her into garments, reinforcing seams in the process and always requesting for the garment to be made tighter. This was noted most famously on the ‘Happy Birthday Mr President’ nude illusion gown created exclusively for the actress by designer Jean Louis in 1962. On screen Marilyn was turning her nose up at the fashionable full skirts of the 1950s – choosing instead to wear body conscious suits and gowns. During the filming of How to Marry a Millionaire Marilyn even went so far to refuse to wear anything full even though her co stars Betty Grable and Lauren Bacall caved in and wore a fuller silhouette. For Marilyn she knew her shape was part of the Hollywood illusion and chose clothing that amplified this.

In her astronomical rise to fame Marilyn’s choice of clothing off camera was not necessarily reflective of her sex symbol status she was fast becoming. She opted for mid-century basics such as capri pants, sweaters and pencil skirts in an often monochromatic palette. In particular Marilyn seemed to have a fondness of houndstooth wearing the pattern throughout the 1940s, 1950s and 1960s in trousers, capri pants and swing coats. 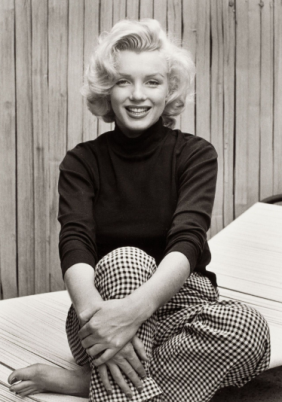 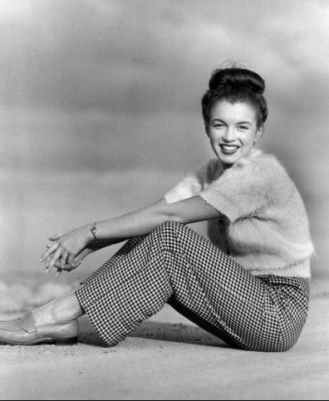 Marilyn began wearing Emilio Pucci designs from 1960 until her death on August 5th 1962. The loose silk jersey knit clung to Marilyn’s shape but not in the overtly sexualised manner of the gowns she wore in the years before. Wearing the young, hip designs would be of importance to Marilyn, who at that time was trying to regain her popularity and relevance amongst the newer generations. She did not want to be seen as the dumb blonde she often portrayed on camera and was implicate in her wardrobe choices when off camera to show more authenticity.

It has been noted in several autobiographies that Marilyn’s personal cleanliness could fall behind when the star was under pressure from the studios. She was noted as having a hatred for underwear and a habit of wearing unlaundered clothing. In fact some of clothing existing today has various stains on it including food and makeup. With Pucci’s design being fairly easy to care for whilst appearing effortlessly chic, these garments would be the perfect uniform for Marilyn in the later years of her life.

The same silk blouse worn during the George Barris photshoot. Sold at Julien’s Auction House for $1900.00

After a turbulent few years resulting in a two divorces and the formation of Marilyn Monroe Productions Inc. Marilyn began to switch up her style, reverting back to a simpler silhouette and more colourful looks. Along with Pucci, Marilyn also favoured designer Jax who had a store close by to Marilyn’s house in California. Jax designed womenswear basics including snug fitting trousers with a centre back zip and an absence of pockets – enhancing the figure in a restrained, casual manner. The trousers retailed for $60 a pair – a costly price in those days and stars like Jackie Kennedy and Elizabeth Taylor would snap them up by the rail load. Nancy Sinatra was so fond of Jack Hanson (designer of Jax) creations that she was quoted as saying, ‘the most important men in America are my father, Hugh Hefner and Jack Hanson.’

Marilyn wearing head to toe Jax on route to Mexico in early 1962. 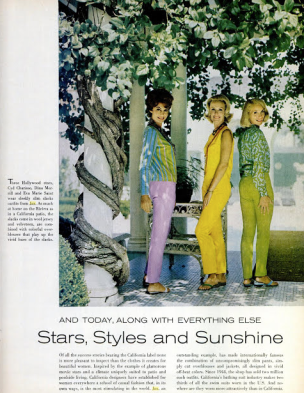 At the time of her death Marilyn, a fan of buying much loved garments several times over in several colours, had a amassed a colourful collection of Pucci separates, dresses and accessories. A selection of Marilyn personal Pucci collection was sold at Christie’s auction house in 1999.

Although Pucci prints were vibrant and eye-catching, on hanger  however the garments could appear lifeless. There was no intricate tailoring, no camera ready embellishments – just a simple cut and innovative fabric choice. The designs particularly came to life when Marilyn wore them who exuded an understated chicness whilst retaining her bombshell legacy of the 1950s.

When tasked with selecting Marilyn’s burial outfit, her housekeeper Eunice Murray helped pick out Marilyn’s favourite dress at the time – the green Pucci shift dress with tassel rope belt. The very same dress worn on Marilyn’s trip to Mexico in February of the same year. When a reporter commented on her dress Marilyn quipped, ‘you should see it on the hanger’.