Prince’s relationship with the Batman franchise began in the late 1960s where a young Prince learned to tickle the ivories along to the Batman television series theme tune. Fast forward to 1989 – Prince had released Lovesexy the previous year, a euphoric album celebrating positivity after the last minute shelving of the ominous The Black Album.

On the surface the partnership of Prince and the Batman franchise seemed a bit of an odd pairing but Prince, a self professed atypical Gemini, held a personal affinity to duality of Bruce Wayne and was drawn to the dark underworld of Gotham City.

Time has not been kind to the Batman record with some fans and critics writing it off as a kitschy puff piece. Historically however the album did well in sales and enjoyed six week’s at No. 1 in the Billboard charts in 1989. All in all I’ve got a mega soft spot for the Batman album…okay except The Arms of Orion – I can’t get off the couch fast enough to skip that song (sorry Sheena!). But I’m not here to discuss the music – let’s talk the looks – green jerry curls and all!  I’ll be looking at the following three music videos from the album; Batdance, Partyman and Scandalous.

This town needs an enema!

The album was oddly released before the film’s debut but go figure, that’s pretty much standard Prince. The first single Batdance is an erratic blend of funk, rock and the pioneering use of sound bites from the film with Prince answering back to the film throughout (‘Oh yeah I wanna bust that body right’).  The video is a kitsch love letter to Prince’s Gotham City with Gemini (one of Prince’s many alter egos) in a comic book inspired ensemble and a harem of doppelgänger Kim Basinger’s gyrating round the sound stage. Yes it is as marvellous and ridiculous as it sounds.

The video is directed by Albert Magnolia with costumes by Helen Hiatt and Susan Stella. The real Prince is behind the scenes, chilling in the studio, laying down the track in high waisted corseted genie pants and triumphant blow dry. It’s his own take of Bruce Wayne leisurewear and I’m very here for it. Side note – my Mum and I’s favourite part of this video is when Prince does a cheeky wee hair flip and smile when he sings ‘hey Jackie’ – even better when my Mum’s name is in fact Jackie. But in actual fact he’s saying ‘hey ducky’ and we only just realised this last week – devastating after all these years.

I was lucky enough to see the Batdance suit in all it’s campy glory at the My Name is Prince touring exhibition at the 02, London last year. I remember vividly screaming in a tour guides face as I tried to barge past a blockage of visitors to get a closer look. The vertical divide suit complete with 1 PVC batwing was still as bright and jarring as it appeared in the video. Looking back on the costume now it’s very reminiscent of the ‘half and half’ costumes worn by burlesque dancers in the 1940s and 1950s. Each costume represented opposing characters such as bride/groom, devil/angel and the dancer utilised each persona throughout their number with clever choreography and design detail – just like Prince does in the music video. 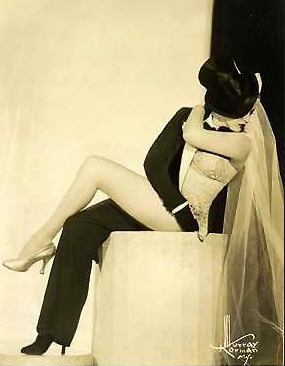 Burlesque dancer Zorita in her infamous Bride and Groom act, 1942.

The dichotomy of the costume goes hand in hand with Prince’s evil twin, Gemini, who appears in the video as a Paisley Park hybrid of the Joker/Batman. The attention to detail in the outfit is astounding with teeny tiny bat symbols on Prince’s signature cuban heeled boots, I’ve never wanted to steal a pair of shoes so much before! For the Joker side of the costumes there an huge nod to Jack Nicholson’s depiction of the Joker in the film.

All hail the new king in town!

Gemini returns in Partyman wearing a more traditional tailored suit (no PVC this time around) again in purple and orange. It’s a pinstriped number with sparkly thread running through as an accent detail with opposing fabric covered buttons. The sleeves of the jacket are adorned in Kanji writing – a foreshadow to the Grafitti Bridge premiere and Nude Japan tour looks to come in 1990.  My favourite thing about the suit has to the impeccable tailoring and clever use of buttons throughout. When Gemini spins round on his cuban heels you can see bright orange buttons acting as a cinch at the waist of the jacket. This is further tailored by the extreme cut of the closure of this jacket, again drawing the eye in to that tiny waist with clever use of button detailing – Gemini’s nod to the zoot suit. Costumes were designed by Helen Horatio & Sarah Daubney – ladies if you are out there I would love to see those dress patterns!

The interesting thing about Prince’s costuming throughout this music video is the emergence of the 1990s silhouette developed throughout the impeccable tailoring of the Paisley Park wardrobe department. With a heavily built up shoulder line with corseted and darted waist with flat fronted closures, Prince was building his ideal silhouette which in turn mimicked that of a hyper version of broad shouldered dames such as Joan Crawford and Marlene Dietrich. There’s a real correlation between the two here seen below in the heavily tailored suit for the Violet the Organ Grinder video, 1991. We know Prince was a huge Old Hollywood buff so I like to think this was intentional. 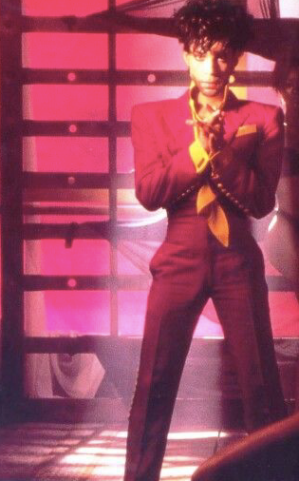 Touch it and explode.

Lastly Scandalous sees Prince incredibly parred down with just over of 4 minutes of sensuous air humping, sashaying and spilting his way through the ballad. He’s really feeling himself in this video. He’s opted for an all red ensemble of high brow MC Hammer trousers with cinched waist and corsetry detailing on the centre seams and shoulder padded tank top with mandarin collar (of course). This look mimic the Batdance studio outfit and seems to be Prince’s idea of sweatpants and old band t-shirt you wear to watch Netflix in bed. The trousers in particular are in interesting mismatch of feminine lingerie detailing (the lace-ups) and zoot suit pleating to add volume and shape to Prince’s silhouette.

Overall the Batdance record provided us with a myriad of transitional looks from the 1980s to early 1990s…and my Mum’s most favourite hair flip in music video history.