Christian Dior has recently launched their new ad campaign for the Rouge Dior Ultra Rouge lipstick collection. Actress and (Dior Girl since 2018) Natalie Portman fronts this campaign with the help of Prince’s hit song Kiss. The advert itself is modern, minimalist and bold. Natalie Portman wears an oversized red knitwear a’la Marilyn Monroe in the film Let’s Make Love whilst dancing around to the 1986 hit. Kiss does seem an appropriate choice for the lipstick line – the song itself now very much seen as an iconic era defining pop song, much like red lipstick within the beauty industry. The edit of the song isn’t the greatest but does work well within the 30 second ad and you can’t deny the song’s relevance to the product it’s selling.

The reactions from fans have been somewhat of a mixed bag with many questioning the authenticity of the relationship between Prince and Dior which I can respect. Some however appear encouraged by the respect shown to Prince’s legacy in the partnership. We’ve got off lightly so far with the likes of the Dior campaign and the piognant use of Mary Don’t You Weep in BlacKkKlansman.

Will we start hearing a flood of Prince music in between our channel hopping? Violet The Organ Grinder for a high-end coffee grinder company, Dinner With Delores promoting a hip new dating app or Daddy Pop for P’s beloved Tootsie Pops? Who knows – this is only the beginning of it with the Estate authorising a slew of releases in the past months. The main offender in my eyes being  the very questionable Prince Funko Pop figures (Around The World In A Day P looks like a well dressed Dudley Moore!).  But is this a necessary evil?

Celebrity endorsement in the fashion and beauty industries has been a successful partnership pretty much since the beginning of show business and consumerism. For me, the use of Prince’s music has the potential to introduce his artistry to a new audience and that can only be a good thing. I would hope future campaigns would use the material respectively, intelligently and creatively. From what we’ve seen this year I remain optimistic that we won’t hear Hot Thing used in a Cheetos commercial but you never know.

Prince was affiliated with the fashion industry throughout his career with a close relationship with Versace for over twenty years. In 1995 a remix of tracks that would go on to feature on The Gold Experience album of the same year was gifted to spectators at an Atelier Versace couture presentation. A year later,  photographed by Richard Avedon, Prince starred in the Spring/ Summer Versace advertisement campaign wearing a tomato red tailored suit and chain mail tank top. He went on to play at a series of press events for the fashion house and forged a close relationship with designer Donatella Versace, gifting her with unreleased music throughout the years. After Prince’s passing, the designer sent models down the runway in signature Purple Rain flouncy jabots, all to the previously unheard tracks he had given to her in January 2016. 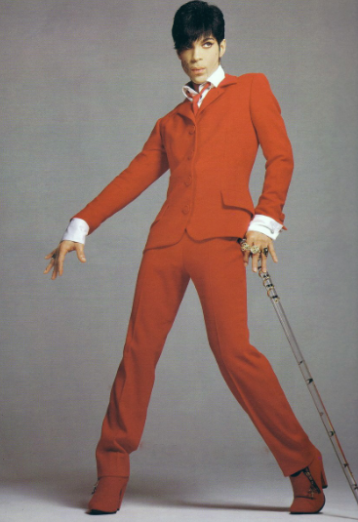 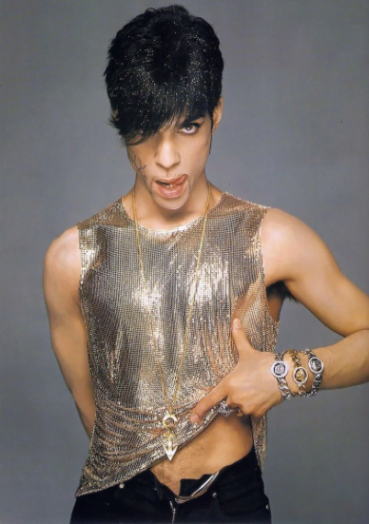 It is known that for the most part the fashion industry does not make profit from their outlandish runways or extravagant couture. Accessible products such as branded IT bags, makeup and perfume is predominately where these designers make their money. It’s no secret that Prince himself was just as makeup obsessed as the next. In an interview with Prince’s cousin Chazz Smith he remembered how Prince would often sneak into his sister’s bedroom to gaze in the mirror, wearing her coveted makeup and clipping on her oversized hoop earrings. He obviously liked what he saw – in the early stages of Prince’s career he wore his afro hair natural, with full glossy lips and eventually went onto relax his hair to mimic disco divas of the era such as Diana Ross and Donna Summer. By the time Dirty Mind was released in 1980 Prince wore smudged eyeliner and a glossy pout. At the height of Purple Rain Prince’s fuschia tinged eyelids were blazened across cinema screens worldwide. Prince challenged the preconceived image of what a black male musician should look like and done so with the help of a fully stocked makeup bag. He continued to wear makeup throughout his life, experimenting with coloured eyeshadow, body makeup and henna.

Long standing hairstylist Kim Berry noted that Prince did all this own makeup. The travelling My Name is Prince exhibition (which this week reportedly declared bankruptcy) allowed VIPs to peek into the delights of Prince’s tour makeup kit. The man seemed to LOVE his Maybelline Great Lash mascara (an industry staple) and opted for a lot of MAC cosmetics. It was also refreshing to see that Prince loved a drug store buy too just like the rest of us with Oil of Olay and Dove skincare popping up often in his makeup stashes. So at least Prince’s music is being used to promote something that he himself was actively interested in – he didn’t have to beat his own mug – he chose to do.

I guess what I am trying to say is that this partnership between Prince’s estate and a global, prestige fashion brand like Dior does feel somewhat in keeping with Prince’s own tastes. Of course Prince was fiercely against the use of his art without his consent but at least, as fans, we can take some solace that the advertisement is at large an engaging, relevant and celebratory use of Prince’s work. The money generated from these advertisements has the potential to keep the Estate afloat, most importantly securing Prince’s legacy – Paisley Park. Archiving the thousands upon thousans of objects from demo tapes to bespoke suits costs top dollar and time. Conservation is not cheap! The wealth and importance of Prince’s legacy demands respect – we must work towards protecting his art not just for today but for all the future Prince fans. The use of Prince’s music is one source of income that will remain consistent so perhaps it truly is a necessary evil. Just no Cheetos adverts please.

One thought on “Prince’s Kiss and the fashion industry.”